Civil rights groups are decrying the erosion of indigenous land rights after a French court dropped a lawsuit from a collective of 97 Bunong minority families from Mondulkiri province in a long-running dispute with Cambodian rubber plantation firm Socfin-KCD.

Attorneys in Cambodia confirmed to CamboJA that on July 2 the Tribunal in Nanterre had ruled the families in Bousra commune had no legal rights or title to the disputed land, where Socfin-KCD under its parent company Bollore Group has been developing a plantation.

The Bunong families expressed their frustration and disappointment with the ruling in a Wednesday statement, writing that the court decision failed to uphold their rights as indigenous people.

“It is because the state did not register us that we don’t have a communal land title. We have other rights to that land and forest, but Bollore through Socfin-KCD has destroyed it all,” the statement read. “We were landlords before the establishment of the Cambodia Land Law, we have been cultivating that land [and gathering] forest products as is our tradition.”

Kroeung Tola, a representative of the Bousra commune villager, told CamboJA the families will appeal the decision. He said he had lost about two hectares without any compensation.

“It is a human rights violation, especially those rights of indigenous people which are stated in both national and international laws,” he said, adding that the court in Nanterre had served the families an injustice. “Now we are landlords becoming victimized.”

In 2008, the Cambodian government granted an economic land concession of 5,300 hectares to Socfin-KCD and Bollore in the form of a 70-year lease. This affected hundreds of families living in seven villages of Bousra commune.

The case in the Nanterre court was first filed in 2015 by a group of nine representatives of the larger group of 97 families who gathered to take legal action against Socfin-KCD and its parent Bollore. A trial was scheduled for 2019 but was postponed after the French government did not grant visas for village representatives to enter the country.

A report issued in 2020 by the Cambodian Center for Human Rights said there were some 800 mostly Bunong families who were affected by Socfin-KCD developments. More than 600 families are directly involved in the dispute brought to the French court.

Tola said initial protests in his area against the land giveaway included about 1,000 families. While some families continue to protest, others have settled on compensation.

Tola said during the clearing in 2008, Socfin-KCD had forced the community to accept a compensation plan that offered only 10,000 riel per tree planted by the community. He said the villagers were told that if they did not accept, the company would clear the land without providing any compensation.

Tola said that, at present, the community does not have good-quality farmland because the company had already taken the better land away without proper compensation.

“We have run away from the village and cleared new forest land. Sometimes the environmental rangers have detained [villagers] for clearing forest land,” Tola said.

Sek Sophorn, a lawyer representing the Bunong families, said most indigenous people haven’t registered for a communal land title but have practiced traditional, rotational cultivation since the time of their ancestors.

“It is an injustice for them because the court in France has only considered the land title, but they didn’t consider other protective rights as the right of using land and the right of cultivating,” Sophorn said, both of which are stipulated in Cambodian law.

He said the villagers have asked to register for communal ownership but have been ignored by the state. Sophorn said the rubber plantation had destroyed ancestral forests used not just for cultivation but also for cultural and spiritual purposes.

Sophorn affirmed legal partners in France will appeal to a higher court to keep the case alive.

Yeout Sarin, Bousra commune chief, briefly told CamboJA he was new to his position and did not know the details of the dispute, though he believed the company had provided compensation to villagers for lost crops.

Eang Vuthy, executive director of the advocacy group Equitable Cambodia, said his organization has provided legal training to the community involved in the dispute but that the majority of indigenous people do not have land titles due to the nature of their traditional land use.

The French court also ordered indigenous families to pay court’s fees of about 20,000 euros, Vuthy added, a sum equal to about $23,670. He said the families are poor and can’t afford to pay this.

He said his organization has provided legal training to the Bunong community involved in the dispute.

“It is very unjust for the Bunong minority who have suffered,” Vuthy said. “It has affected them emotionally to lose their land and fail in the court case.”

Mondulkiri provincial Governor Svay Sam Eang could not be reached for comment. 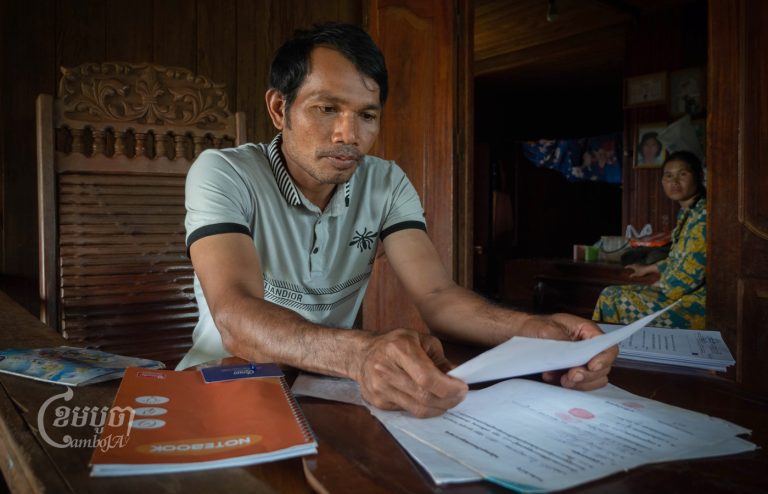