Hun Sen wrote on his Facebook page on Monday that, having clearly listened to an interview that Sary gave to The Cambodia Daily on Saturday explaining that his previously published six-point analysis on Rainsy’s proposal was just “analyzing a scenario”, he now believes that Sary’s work was both reasonable and acceptable.

“On behalf of the head of the government, I appeal to the court to consider halting the arrest warrant on Dr. Seng Sary,” he wrote. He encouraged Sary to continue his research and social analysis in the interest of social science. The prime minister also wrote that Sary’s family members should not worry anymore.

Hun Sen ordered the political analyst’s arrest last week for allegedly saying that he believed a national unity government was in the works, an idea apparently instigated by former opposition leader Sam Rainsy. Rainsy remains in exile in France.

On July 21, Sary had posted an analysis on the possibility of Rainsy forming a unity government that would draw together public forces, youth, internal forces within the ruling party, armed forces, and international and neighboring countries.

On Saturday, Sary told The Cambodia Daily that what he had written was not intended to show support for any unity government described by Sam Rainsy.

“My writing is an analysis of a scenario in which there are conditions, it does mean that it can happen unless it has conditions such as one, two, three, four or five,” he said. “So, my writing has no paragraph to show that I supported any movement.”

“I would like to verify that this writing does not show that I supported any groups,” he said. “I am not a politician, I am a scholar.”

Sary did not respond to CamboJA’s request for comments. However, he wrote on his Facebook page that “Mom can go to the pagoda ahead of Pchum Ben Day, and Mom doesn’t worry about someone saying that you have a traitor son”.

“My lovely wife, you can open the gate to allow our children to play as normal,” he said.

Am Sam Ath, deputy director at rights group Licadho, has applauded the prime minister’s appeal not to arrest Dr. Sary, noting that freedom of expression of independent analysts is very important in developing a society.

“It is a good sign for analysts and other people who want to share opinions to continue their work,” he said.

Political analyst Meas Nee, who was also mentioned by name in comments by Hun Sen on Friday warning him not to be “arrogant” in his public criticism of Cambodia’s increasingly close relationship to China, also welcomed the prime minister’s decision.

“Usually, we analysts have no influence or any forces to threaten the stability of the government,” he said. He added that he was happy the prime minister had listened to what analysts have raised about matters in Cambodia’s society.

“Threatening is a serious thing,” he said. “No one dares to speak out about the negative points of the government.”

Neither Phnom Penh Municipal Court president Taing Sunlay nor his spokesman could be reached for comment. 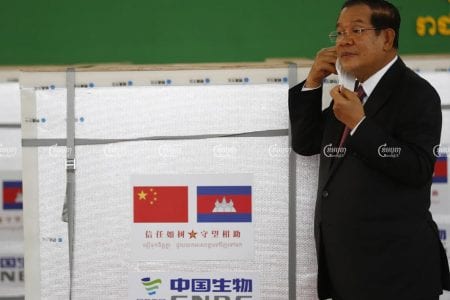