In Friday’s closing arguments in the border incitement trials of prominent unionist Rong Chhun and activists Sar Kanika and Ton Nimol, the defense called for a full acquittal on the grounds of insufficient evidence.

Chhun, who is president of the Cambodian Confederation of Unions and a member of the Cambodian Watchdog Council, was arrested last year on July 31 and has since been held in pre-trial detention. The accusation against Chhun came after he wrote a Facebook post and made other comments on Radio Free Asia (RFA) in which he claimed that farmers in the border province of Tbong Khmum province had lost land during demarcation of the boundary with Vietnam.

Chhun had gone to the border area on July 20 to inquire about the issue and published a statement the next day on Facebook.

Those comments led the court to charge Chhun with incitement to cause social chaos. The two youth activists Kanika and Nimol were also charged with incitement after they were arrested in August during protests calling for the release of the jailed Chhun.

The Cambodian government is highly sensitive to the border demarcation process. Many Cambodians, including members of the dissolved CNRP political opposition, allege that Cambodia has ceded territory to Vietnam as border posts have been placed along the border.

Over a three-hour-period in the hearing room, defense attorneys Choung Choungy, Sam Sokong and Ket Khy asked for the acquittal of all three defendants.

The lawyers made a point of distinguishing the cases of Chhun from those of the youth activists, who they said had not gone to the border nor shared Chhun’s comments online. The lawyers also asserted their client Chhun had only published a statement based on other people’s comments that farmers in Tbong Khmum had lost land during the border demarcation.

Sam Sokong said Chhun went to the border at markers 114 through 119 after RFA reported on the same issue.

“In a democratic country, the people have the right to exercise their freedom of expression about any problem,” said Sokong.

Sokong said Chhun had interviewed people along the border who told him they had lost land, and that local authorities had also banned farmers from working their fields until the new delineation was set. This all became the basis for Chhun’s statement, the defense lawyers said.

Choungy said the statement had not been incitement but rather a request to the government to strengthen measures to prevent foreigners from abusing people’s land.

“This is not his opinion because the citizens told him,” Choungy said. “The people told him that they lost hundreds hectares of land.”

Though Chhun’s case took up much of the time, the defense lawyers said the charges against Kanika and Nimol are separate from that of the union leader, as they had only joined the protest demanding his release.

Ket Khy also questioned how prosecutors could demand the compensation of 5 billion riel [about $1,228,000], saying this sum is unreasonable as punishment as the case does not have any damages.

Deputy prosecutor of Phnom Penh Municipal Court Seng Hieng acknowledged Chhun had met with 10 families along the border but said the Joint Border Committee had denied Chhun’s statement and issued its own saying Cambodian people had not lost their land.

Hieng continued to say Chhun does not have technical knowledge of the border nor equipment to measure it, questioning why he dared to claim that farmers had lost land.

“The speech of Rong Chhun causes discrimination between Cambodia and Vietnam and his comment is false to make the public misunderstand,” Hieng said.

He continued that Kanika and Nimol supported the activity of Rong Chhun and that the court should have enough evidence to convict the defendants with incitement.

Hieng said defendants may face imprisonment from six months to three years and fines between one million to four million riel.

Koun Saroeun, the lawyer for the Cambodia Border Affairs Committee who requested the heavy fine, argued along the same lines as Hieng and said he believed Chhun’s activity affected the credit of the country.

Khum Ponnaban, a director and technical officer at the Border Affairs Committee, said in the hearing that he regretted that Chhun’s comments were based only on people’s words. Ponnaban said the unionist was not correct because he didn’t have any documentation to clarify the border problem.

“The citizens do not lose land,” Ponnaban said. He continued that the border technical commission has used mapping to demarcate 84 percent of the boundary line.

In the hearing room, Judge Le Sokha allowed Chhun to present questions to Ponnaban through a judge. However, when Chhun did so, Sokha rejected his inquiries and said they were not relevant to the case.

The verdicts of the three defendants will be announced on August 18.

Am Sam Ath, the deputy director of human rights group Licadho who joined to monitor the hearing, said the charges against Chhun and the other defendants are unreasonable.

If Chhun released a statement misunderstanding the work of the Border Affairs Committee, Sam Ath continued, they should have contacted him to discuss the matter.

“I think that if they explain to Rong Chhun about the information in his statement they can order Rong Chhun to do something to settle it. And then the problem will finish,” said Sam Ath.

He said the arrest of Chhun appeared politically focused because the union leader used to be a member of the National Election Committee from the CNRP in addition to his other roles. 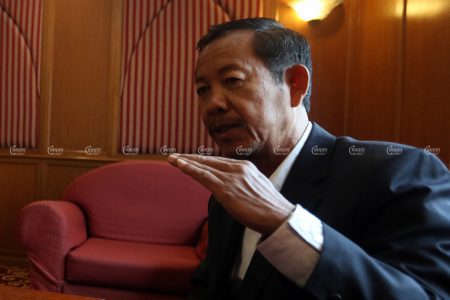 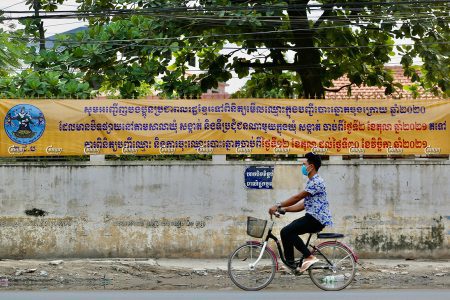 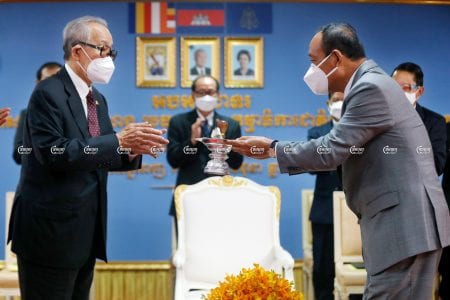 Public reluctant to trust the independence of new NEC president 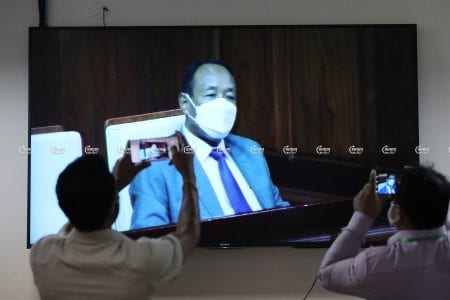 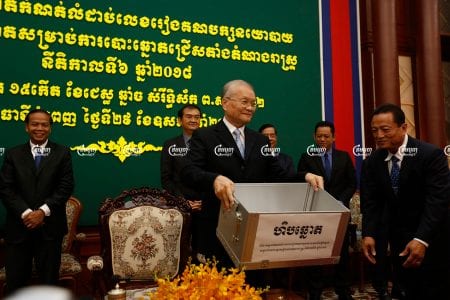