“Our trade at the moment is not very big [but] it is in favor of Malaysia. We have a trade surplus against Cambodia,” Mahathir said.

can buy perhaps more rice and also you produce a lot of very good fruit and other products, and once we identify them we can increase our imports from Cambodia and reduce the deficit,” he said.

Hun Sen said after the signing ceremony that bilateral trade with Malaysia was valued at $500 million in 2018. In just the first six months of this year, the value of the trade had reached over $400 million, he said.

“I and His Excellency Mahathir have ordered the relevant institutions in both countries to find ways to expand this trade,” Hun Sen said, adding that Cambodia and Malaysia would also sign separate MoUs on defense cooperation and anti-human trafficking. The two countries also reached agreements on tax evasion and tourism.

“Tourism is very important not only for the economy but also for the good relations between countries, and we will encourage as many people as possible to make visits among our two countries,” Mahathir said.

During the talks, Hun Sen also urged Malaysia to help protect Cambodian workers there. Mahathir replied that protections were in place for foreign workers.

In June last year, Cambodia resumed allowing maids to travel to work in Malaysia following a six-year ban due to a string of abuses at the hands of employers.

Hun Sen and Mahathir also discussed international sanctions, which Mahathir said had the side effect of hurting small countries as they could no longer trade with sanctioned countries.

“This is grossly unfair. As small countries, we cannot apply sanctions on anybody but it is the big powers who applied sanctions and therefore deprived the small countries of their freedom, in spite of the fact that they keep on talking about human rights,” Mahathir said.

“Our freedom and the like they took away. They take away our freedom to trade with our own trading partners, so this is grossly unfair. We find that the United Nations is a good forum for us to raise some of these issues,” he added.

The 94-year old Mahathir has been on a three-day visit to Phnom Penh since Monday. 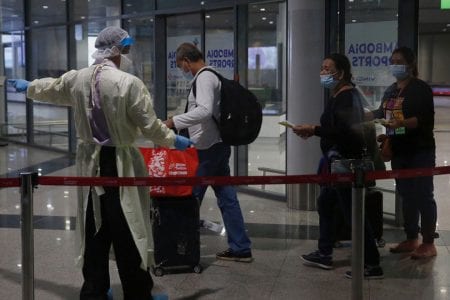 Man tests positive for Covid-19 upon return from Malaysia