More than sixty civil society organizations, unions and local communities have expressed concern over the government’s intention to establish a National Human Rights Commission of Cambodia, calling on the government to first improve the current human rights situation and questioning whether such a body would be able to operate independently of the government.

The statement came after the government’s Cambodia Human Rights Committee (CHRC) launched a period of consultation to gather comments and inputs for the draft law on establishing a National Human Rights Commission of Cambodia.

The joint statement, which was signed by 61 CSOs, unions and local communities across the country, said that even though a national human rights body is needed, Cambodia’s deteriorating human rights situation boded ill for its independence.

“We call on the government to prioritize the restoration of current human rights situation first … to ensure the establishment of the body would promote real human rights,” it said.​ “At the time of establishment, it must be carefully considered in accordance with the Paris Principles to guarantee international minimum standards for credibility and effectiveness.” The Paris Principles lay out the minimum standards for human rights bodies such as the one proposed by the government, in which independence is the first and most essential requirement.

The statement said that respect for human rights in Cambodia had continued to get worse throughout 2021 amid challenges caused by COVID-19. It added that the government still put restrictions and limits on basic freedoms by using the judicial system to harass​ human rights defenders, opposition members and independent journalists.

Chak Sopheap, the executive director for Cambodian Center for Human Rights (CCHR), which undersigned the joint statement, told CamboJA that given the government’s disregard for human rights over the past few years, there was little chance that the conditions for an effective and credible national human rights body would be met.

“The recent governmental crackdown on fundamental freedoms – illustrated ‘inter alia’ by the judicial harassment that activists, human rights defenders and journalists face – exemplifies this,” she said. “In this context, the [government’s] sudden interest in establishing an NHRI [National Human Rights Institution] does not seem genuine, but rather motivated by its desire to placate the international community’s growing criticism of Cambodia’s human rights record.”

In a press release dated July 8 this year, the Cambodia Human Rights Committee announced the consultation period’s launch to the Office of the United Nations High Commission for Human Rights in Cambodia, civil society organizations and other stakeholders. It said the public can also provide comments and inputs via the CHRC Facebook page or Telegram channel.

The consultations would take place either through face-to-face meetings or via video conference by the end of 2021, starting from July 21 onward.

Chin Malin, Vice President and Spokesperson of the Cambodian Human Rights Committee, alleged on his official Facebook page on Wednesday that the concerns of these civil society groups reflected the groups’ political character.

“For [their concept], respect of human rights comes only when the parties they support and their allies come to power,” he said. “This shows their agenda and political activities taking place under the banner of civil society organizations in Cambodia.”

“[It] is just in the beginning stage, but they are rushing to evaluate, interrupt and criticize the effectiveness of this institution,” he said. “They should not worry too much about the ‘unborn child’, but instead should be open-minded, cooperative and support the establishment of this institution to be successful and meet the real needs of all parties.”

Malin said the institution has been proposed since 1997 under the preparation of civil society groups, but the government had decided to take over the work in 2019 due to lack of progress.

Social researcher Seng Sary said that while civil society organizations play an important role in democratic societies, they were not the only ones to criticise human rights abuses in Cambodia.

“This issue of human rights, democracy and political freedoms in Cambodia have been raised for years while the government continues to reject [criticism],” he said. “The withdrawal of [20 percent of] trade preferences to the EU and the United States’ law on democracy and human rights to punish Cambodian officials accused of serious human rights abuses, are indicators to measure human rights and democracy in the country.”

In the first six months of 2021, there were no fewer than 11 instances of the unlawful use of state force at public assemblies, according to a report released by CCHR. Of the 11 assemblies met with police violence, ten were protests organized by the Friday Women, a group that has led weekly demonstrations calling for the release of imprisoned members of the opposition CNRP.

Prum Chantha, who protests every Friday to call for the release of her husband, said that her group was often cracked down on by the authorities and accused of gathering illegally.

“Every day I am at home being monitored and discriminated against by authorities,” she said. “They restrict all my freedom and if we criticize them, we would be under threat or imprisoned.”

Seng Chathan, the wife of former opposition activist Sun Thun, said she welcomes the government’s intention to create a new national human rights body but is waiting to see if it will work effectively.

“If they have formed [the body] but still do not address the human rights abuse, then we are still hopeless and any protest will be cracked down on by the authorities,” she said. 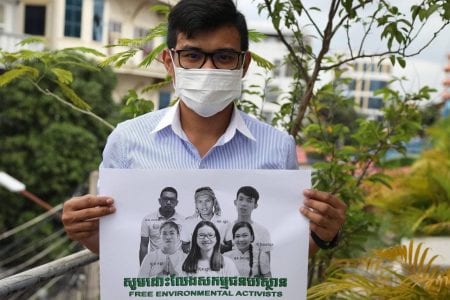