The Phnom Penh Municipal Court has finished the trial of activists who took part in an October 23 protest outside the Chinese embassy calling for the Cambodian government to respect the Paris Peace Agreements and oppose a Chinese military presence.

Three of the activists, Lim San, 57, Yoy Srey Mom, 50, and Ton Nimol, 40, were apprehended by police officials and district security guards near the embassy. Four others, Sat Pha, 47, Pai Ren, 43, Sann Sreyneath, 41, and Hong An, 45, were arrested later. All seven are affiliated with the forcibly dissolved CNRP opposition and were charged with incitement to cause social turmoil for their demonstration.

Now they await the verdict of Judge Ouk Rethkunthea, who said she would announce her decision on August 2.

The defendants accepted in the hearing they participated in the protest but denied any wrongdoing, saying they were exercising their freedom of speech. The state prosecutor and police, including a member of the National Police Department of Counter-Terrorism and Transnational Crime, argued the small protest was illegal because it was not officially sanctioned by authorities.

Sat Pha, who in the past was an activist on the Boeng Kak land issue, said police officers had attacked her at the protest and injured her leg, requiring her to be sent to the Khmer-Soviet Friendship Hospital for treatment.

“Police officials who wore plainclothes arrested me at the hospital and pushed me into their car,” she said.

The activists were unanimous in their rejection of the charges against them, saying they had only acted in the interests of Cambodian society.

Sann Sreyneath said police arrested her at her home after the protest while she was with her four-year-old child. She described her motivation to join a group who went to the embassy, a small collective called the Brave Women, after prominent unionist Rong Chhun was arrested in August for comments he made regarding the Cambodian government’s secretive national border negotiations with Vietnam. Sreyneath said his arrest encouraged her to act because she saw it as an injustice, saying Chhun only wanted to help the nation.

“I want democracy and freedom of expression, and I don’t want to see the authorities hurt citizens,” Sreyneath said.

“I did not collect any people to join the protest, but I joined the protest by myself,” she added. “I think that I did nothing wrong because I just demanded [adherence to] the Paris Agreement.”

The other defendants said the same, pointing out the disconnect between the “social turmoil” charge and the reality of their small protest. Hong An, who had joined the Brave Women about two months before her December arrest, said the protesters had only been working for the betterment of Cambodia.

“The Brave Women group joined together to demand freedom, to love and trust the nation,” said  An.

Chhay Hong, deputy prosecutor of the Phnom Penh Municipal Court, accused the protestors of receiving support from other CNRP members, including politician Ho Vann, arguing the group had received some money to buy some food and other things.

Lim San acknowledged that Vann had previously given her $300, but said this was for medical treatments and unrelated to any protesting.

Defense attorney Sam Sokong said his clients only wanted democracy for Cambodia and rejected the claim they had been paid to protest.

“Relating to asking permission, this case involved freedom of expression, so their going to protest is not illegal because they just used the right of expression,” Sokong said, asking the judge to acquit the activists. “They did not cause turmoil to social security.”

Ny Sokha, head of the monitoring unit at human rights group Adhoc, said the defendants were peaceful protestors who did not do anything to affect social security.

“This restricts the freedom of the people and their expression,” Sokha said, explaining the case is a product of the political conflict between the ruling CPP and former opposition CNRP.

Chak Sopheap, executive director for the Cambodian Center for Human Rights (CCHR), said the use of criminal charges against the protestors constituted an arbitrary and unjustifiable interference with their fundamental freedoms of expression, assembly and association.

“These fundamental rights are protected in international human rights instruments ratified by Cambodia, as well as domestic law,” Sopheap said. “As per the law, these rights may only be restricted in exceptional and narrow circumstances, only in conformity with the law, if it is necessary in a democratic society and if it pursues a legitimate aim.”

She also said CCHR strongly condemns the further use of force on Thursday by authorities who dispelled members of a group known as the Friday Women who demonstrated in front of the Phnom Penh courthouse during the hearing. The women, who are the wives of imprisoned members of the CNRP, had gathered again to demand the release of their husbands, as they have done consistently before.

Sopheap added that the Friday Women have every right to express their discontentment and peacefully call for the release of their unlawfully detained family members. Authorities should ensure they can freely and safely exercise their freedom of assembly and expression, she said, rather than attempting to silence them through violence.

“In a context of intensified repression of political activists, human rights defenders and other critical voices, CCHR reminds the [Royal Government of Cambodia] of its international obligations and duties to respect, protect and fulfill human rights,” Sopheap said. “Therefore, the RGC is strongly encouraged to take all the appropriate measures to ensure that these rights can be exercised freely by all in the Kingdom, regardless of their opinions and beliefs.” 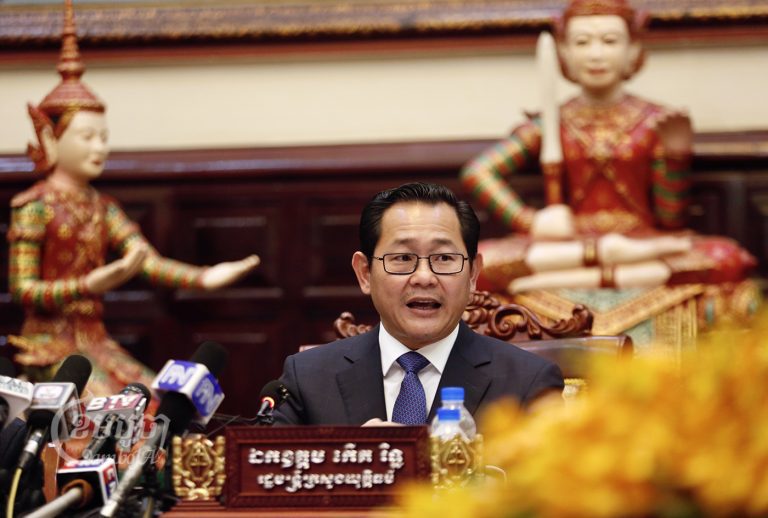