The Phnom Penh Municipal Court on Friday sentenced business tycoon Kith Theang to four years in jail in connection with a drug raid at his Phnom Penh nightclub last year.

Theang, the brother of Cambodia Chamber of Commerce president Kith Meng, was arrested in March last year following a raid at the Rock Entertainment Center, in the city’s Chamkar Mon district, on Feb. 23. Police found 50 kg of methamphetamines and other illegal drugs, and arrestd more than 300 people.

On March 11, an investigating judge charged Theang with arranging and facilitating the illegal use of addictive substances and conspiracy under Articles 42 and 44 of the Drugs Control Law and Article 29 of the Criminal Code.

Presiding Judge Im Vannak on Friday announced his decision to sentence Theang to four years in jail and with a fine of 8 million riel (about $2,000), according to court spokesman Suos Vithyearandy.

Asked whether Theang was detained in prison or being treated at a hospital, Vithyearandy said he did not know and declined to answer further questions.

Theang was sent to hospital to treat a health problem in April last year. Chhim Thida, director of Phnom Penh’s PJ Prison, told CamboJA News that “for now, Mr. Kith Theang has been receiving treatment at the Khmer-Soviet Friendship Hospital.”

Thida said he did not know what specific health problem Theang was dealing with.

PJ Prison, located on the compound of the Phnom Penh Municipal Police headquarters in Russei Keo district, has a reputation for being reserved for prisoners with connections and wealth.

Mok Chito, deputy National Police chief, said that according to his communications with the court, Theang had been sentenced for arranging and facilitating the illegal use of addictive substances, but still faces prosecution under another case related to drug trafficking. “The court has not had a hearing for that yet,” he said.

Ty Kimsrean, Theang’s lawyer, could not be reached for comment.

According to a report issued by the National Authority for Combating Drugs (NACD) on Monday, authorities handled 9,806 drug cases last year, a 23 percent increase compared to 2018.

The report said 20,490 suspects were arrested, a 25 percent year-on-year increase; and 751 kg of drugs were confiscated, a 40 percent increase. 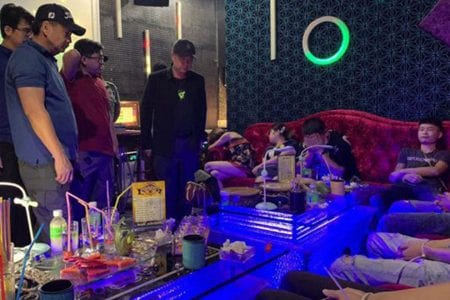