The expiration of the United States’ generalized scheme of preference on December 31 would affect importers and buyers of Cambodia’s travel goods until its reauthorization, according to a garment manufacturing trade body.

The U.S. generalized scheme of preferences (GSP) allows for Cambodian travel goods to enter the world’s largest economy free of tariffs. But, as the U.S. Congress delayed passage of key appropriations bills in late December, the reauthorization of the trade program lapsed, which means U.S. importers would pay “most favored nations” tariffs on Cambodian imports.

The Garment Manufacturers Association in Cambodia (GMAC) released a letter on Wednesday informing its members of the development. The delay in reauthorizing GSP will not impact Cambodian travel good manufacturers, who are already reeling from the effects of the COVID-19 pandemic.

Van Sou Ieng, chairman of GMAC, said he hoped that the trade program would be quickly reauthorized and if it was a short delay it would not impact the sector.

“The U.S. will just take only two months to retroactively [authorize] the program, as the products have already been ordered by the buyers and should not provide any impacts,” he said.

GMAC statistics show that $1.2 billion in travel goods were exported from Cambodia in 2019, double the figure recorded in 2018.

No other products from Cambodia are eligible for U.S. GSP. The European Union’s “Everything But Arms” trade preferences was critical for Cambodia’s garment and rice sectors, but the economic bloc had suspended some of these privileges owing to Cambodia’s fast-deteriorating human rights record.

The U.S. Congress has in the past passed the GSP retroactively allowing for U.S. importers to get a refund on any tariffs paid in the interim.

Arend Zwartjes, a U.S. Embassy spokesperson, said the decision to reauthorize the GSP was with the U.S. Congress, and goods would not be tariffed under the “most favored nations” rates of duty.

“As a result, imports entering the United States that were previously eligible for duty-free treatment under GSP are now subject to regular, Normal Trade Relations (MFN) rates of duty,” he said.

According to the spokesperson, GSP authorization has expired on several previous occasions, most recently in 2017. Arend said importers should continue to mark GSP-eligible imports with the applicable special program indicator (SPI) for GSP, which will allow U.S. Customs and Border Protection to process duty refunds automatically.

Suzuki Hiroshi, CEO and chief economist at the Business Research Institute for Cambodia (BRIC), expected the impact to be minimal on Cambodian exports on account of the procedural delay.

“It seems this is only the delay of procedures because of the current confusion in the U.S. Congress. I am confident that the U.S. Congress and government will allow the extension retroactively in near future,” he said.

Ath Thon, president of the Cambodian Labor Confederation, said that if the reauthorization took longer than expected it could cause some difficulties for the fledgling sector, which is already impacted by factory closures and work stoppages.

“We still don’t know when the program will be renewed. Buyers will need to pay import duties but it may also impact the production chain as buyers could lower prices or orders,” he said.

In 2020, there were more than 170 garment factories that closed or temporarily suspended their operations, affecting tens of thousands of workers across the country. 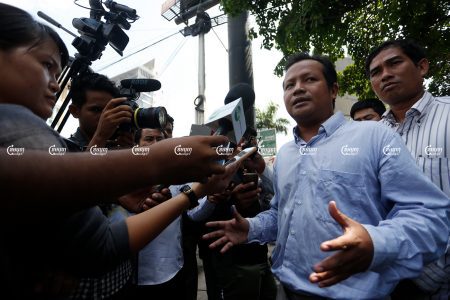