More than 1,000 former staff from two shuttered two garment factories face uncertain futures, after an auction of manufacturing equipment seized from their former employers’ failed for the second time on Wednesday to raise enough money to pay out salaries and bonuses owed.

One potential buyer offered $720,000 for the goods but, the sale was rejected, with a reserve price set at $1,777,000, said Yim Kethy, Kandal Provincial Court bailiff.

“We are re-considering the auction because there is no one who can afford to bid at that price,” he said, before hanging up on a reporter.

Wednesday’s auction was delayed from December, when just one of four registered bidders arrived to participate and also rejected the basement asking price for the goods, which were seized after the ECO Base and Dignity Knitter factories were officially shuttered in June.

Workers are claiming wages and bonuses withheld since December 2019, when the factories began to scale down operations before three months of work suspensions leading up to the official shutdown.

Phin Sophea, a representative for the Coalition of Cambodian Apparel Workers Democratic Union (CCAWDU) at Dignity Knitter, where he has worked for 14 years, said that $720,000 would not cover what staff of the two factories are owed and called for the provincial government to make greater efforts in promoting the sale of seized goods.

“The auction committee should display all of the equipment that has been seized, not just two types of machines,” he said, adding that computers, furniture, material and other items were going unseen by potential buyers.

“Our livelihoods are seriously affected; we have been waiting one year for a resolution.”

Claimants will continue to guard the factories around the clock, he said, which they have done since June, staving off multiple attempts from factory owners to reclaim the goods inside.

Another worker, Suor Socheat, 41, who attended the auction on Wednesday, expressed her disappointment that the auction failed, noting that the buyer was unable to see some of the goods that he was interested in purchasing.

“When the buyer can’t see as much as they want, they will offer the cheapest price,” Socheat said, adding that she had been unable to find work since the factory shuttered.

Kandal provincial governor Kong Sophorn said that the auction committee formed to oversee the settlement would organize another auction.

“We really wanted a high price but there are not many people interested in bidding,” he said. “We are worried about workers’ livelihood, but the legal process does not move as fast as we need.” 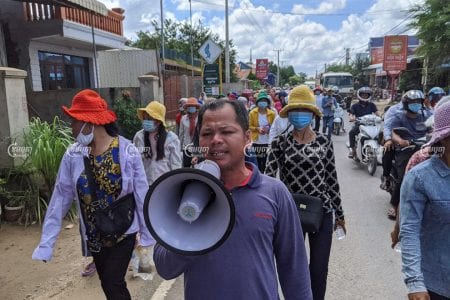