Oddar Meanchey authorities are suing ten families who, after being evicted to make way for a Thai sugarcane plantation more than a decade ago, have begun farming on their former land again.

The provincial Forestry Administration has filed a lawsuit against the families in Samraong city’s Taman village accusing them of encroaching on state-owned land and the families were questioned in court a few days ago and placed under judicial supervision, according to Srey Naren, Adhoc’s Oddar Meanchey coordinator.

In 2008 and 2009, more than 700 families in 26 villages were forced to give up their land for Mitr Phol’s 9,400-hectare concession. After the company pulled out in 2015 and returned the land to the state, some of the impacted families began to farm there again. The government has since handed over the land to another agro-industrial company, San Heang, for forest restoration.

“They need to have documents to prove that they have been occupying the land for a long time, so we can ask the government to cut the land for them,” he said. “If they don’t, they will face penalties or imprisonment.”

But farmer La Phout, 40, said despite the legal threats he would continue farming on his former five hectares in the area.

“My life depends on this land. They said that I am illegally encroaching the state forest land and they warned I will be imprisoned,” he said. “But I don’t care because I have cultivated the land for years and if I leave there I have no place to go.”

“If the state needs the land back, we just ask for some plots to live,” he added.

Another farmer, Choam Ra, said he can earn about $2,500 a year growing crops and rice on the land, and if he is stopped from doing so he’ll have no way to make a living.

“Without this land, I may migrate to find a job in Thailand,” he said.

Fellow farmer Blan Vy, 31, said no-one had stopped the villagers farming the land between 2015 and 2021, when “a private company  came to clear our farmland for forest restoration.”

The farmers don’t have any documents supporting their claims to the land, said former Taman village chief Chat Boeun, explaining that in 1998 the village commission gave 95 families each five hectares of land.

“And at that time, we did not issue any land tenure documents to them,” he said. “I just remember that I wrote a letter to the commune and district authorities, and the provincial agricultural department, requesting to allocate land for people.”

Adhoc’s Naren said authorities should provide appropriate compensation to farmers and “deal with them in a transparent manner, not using coercion and suing them.”

In 2013, after revealing that Mitr Phol was one of its top sugar providers, Coca-Cola announced it was auditing its supply chain amid a “zero tolerance” policy for land grabs.

Last month the families who were violently evicted by Mitr Phol filed a petition in a US court asking that Coca-Cola be compelled to turn over evidence as part of their ongoing case against the sugar giant. The new case filed in the Northern District of Georgia asks for the beverage company to publicly disclose its audit findings and is expected to be heard early this year. 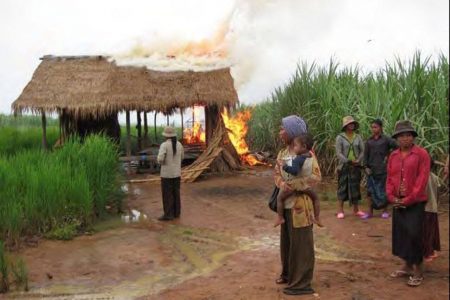