Though residents of Kampong Talong village are barricaded from their farmland, the area is still bustling with activity – mostly from dozens of trucks transporting soil and stones to the site of the mega-airport development that promises to transform life in this stretch of rural Kandal province.

Authorities have enforced restrictions on access to the disputed land since the violent September crackdown on protest in the village, which led to criminal charges for nine people now being prosecuted by the provincial court for incitement to commit a felony. Months after the clash, an attempt last week from a CamboJA reporter to visit the farmland was firmly rejected.

“Where do you want to go?” a security guard asked before quickly making up his mind. “Sorry! you are not allowed to enter or pass the site unless you have the passing card and this is only for those who work here.”

But while the local villagers say there’s work to do in their fields, guards such as this one won’t let them pass. As their farmland is now reportedly being cleared by the major developer Overseas Cambodia Investment Corporation (OCIC) even before they’ve agreed on compensation prices, some villagers are still holding out hope for what they believe is a fair deal and an end to the long-running land dispute.

Local resident Khim Maly, 42, said her house is just about 1 kilometer from the airport’s future runway. Maly said the villagers’ demands over the years have yielded no improvements in raising the offered compensation rate of $8 per square meter, a sum the holdouts say is far below market value. Even still, the company returned in November to measure people’s houses for another round of compensation based on a rate the villagers have already refused.

“We have submitted the petition to [Prime Minister Hun Sen] many times, but they threw it into the dust bin,” she said. “This time, we will sleep in front of the prime minister’s house in Takmao until we receive notice from Samdach.”

Since 2018, Maly and hundreds of other families in four communes in Kandal Stung district and Takeo province’s Bati district have seen farmland they have cultivated for years – and sometimes decades – taken by the state to make way for large-scale development.

At the center of the dispute is the $1.5 billion airport project developed by OCIC. The company specializes in major infrastructure projects and is owned by the well-connected oknha Pung Kheav Se, who is also the chairman of Canadia Bank.

Land disputes as a whole have come to make up a key issue in modern Cambodia. In some conflicts, villagers are paid for their land or crops, but often at a price far lower than market rate. In others, villagers are made to move without compensation, with authorities claiming they have been illegally squatting on the land.

The Kandal province villagers now protesting their clearance to make way for the mega-airport said they had already submitted four petitions to Hun Sen seeking intervention. With no responses, the villagers have continued to protest the land clearances. Last month, they went to the CPP headquarters in Phnom Penh to submit a petition seeking the help of top party leaders to find a more equitable solution.

However, in a response letter to the peoples’ demands dated December 20 and just sent to villagers on January 4, the Ministry of Land Management appears to be standing firmly by its existing position on the conflict. As seen in a picture of the letter sent to CamboJA, the ministry stated authorities will continue offering residents two choices: Either accept a land exchange for property elsewhere or compensation of $8 per square meter, a sum villagers have continuously rejected as too low.

According to the ministry, compensation for more than 1,404 hectares of land affected by the project has been resolved. A remaining 887 families with more than 692 hectares remain in dispute with OCIC.

The villager Maly said the rate of clearances in the restricted area now means local people cannot even recognize the location of their former farmland.

“They have already taken our land – actually they are robbing our land, and offering $8 is just better than saying they’ll take it for free from people,” she said. “If I agree with that price, I’m still poor, so I decide not to take it. If I am still alive, I will continue to fight even until the aircrafts land”

Toun Vannak, another villager whose house and farmland have been directly affected by the airport project, said he cannot accept the ministry’s proposed solution.

“It will make my family poorer and poorer,” he said. “Now we still continue to demand, [even though we are] depending on good luck … because even Prime Minister Hun Sen has not responded to our request.”

For villagers who have been charged with crimes through the dispute, the situation looks even more bleak.

Bo Leab, 45, and her husband have been charged by the Kandal provincial court for protesting the clearances. Leab said conditions for her family have deteriorated since officials cut off access to the land.

“Our protests are getting worse. Every time we go to file a petition, we have to leave at 4 a.m. in the morning to avoid the authorities’ obstruction,” she said. “I cannot sleep when I think about this. I always tear up when talking about my land, I am almost going crazy.”

Leab said the company always threatens her family to accept the price or exchange land elsewhere, stating she may otherwise lose the land without compensation.

Kandal provincial governor Kong Sophorn said he is not aware of how the people’s farmland has been cleared so far since the situation looks quiet.

“The case is in the hands of the dispute solution committee, however, so far we remain based on state policy for which nothing has changed,” he said. “And provincial authorities have yet to receive new instruction from the top level as well.”

Sophorn said most affected people have accepted the offered compensation, with about 15 percent of residents still refusing the deal.

At least some of those residents feel they cannot leave their investments without more compensation.

Seng Leng, a 43-year-old who just borrowed $20,000 to build a new house, said her family members rely on farming for their livelihood.

“I just completed the house and now face relocation,” she said. “I decided to borrow money from the bank because before they said the project would only affect farmland, but now it affects the houses in the village as well.”

Leng currently relies on husband who has been working as a security guard in the airport construction site earning $200 per month. She needs to pay off her loan at a rate of $450 per month, with most of her payments coming from her son who works as an excavator driver in Stung Treng province.

Rights observers have been vocal about the conflict since its earliest days, identifying the dispute as a central example of land tenure issues in Cambodia.

Vann Sophath, a business and human rights project coordinator at the Cambodian Center for Human Rights, said that while people continue to use their rights as protected by the Constitution, rights observers are still concerned the villagers may face violent crackdown and accusations of incitement.

“Authorities and companies do not think about the people’s interests,” he said. “Instead, [they are] pressing them with forced eviction and using the court system to press them to accept the unreasonable offer, which is a form of serious human rights abuse.”

Sophath said civil society organizations have so far urged the development to respect human rights through transparency and sustainability. He also said the price offered by the state and company is not in line with the current market price.

“They should receive reasonable and fair compensation,” he said.

For the remaining holdouts, it’s becoming harder to imagine a scenario in which that actually happens.

Nai Phorn, 50,  said his wife is among the nine people who were charged during the September protest. Phorn said the court has not dropped charges against that group, which has chilled the efforts of others to continue their advocacy.

“We are living in fear,” he said. “Now we are just waiting to see our fortune, because we have already submitted petitions everywhere but without a ray of hope.” 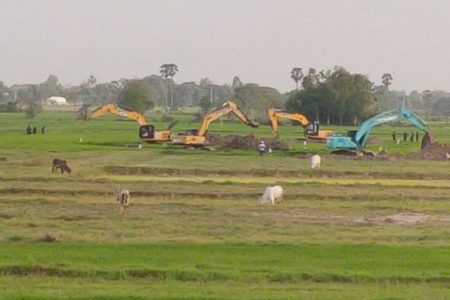