Garment factory unions and workers have called on the government to adhere to its schedule to negotiate a minimum wage increase for workers this year after the garment industry’s representative group released a statement calling for annual wage negotiations to be delayed.

The Garment Manufacturers Association in Cambodia (GMAC) issued a statement June 23 calling for minimum wage negotiations, set to take place from July to September, to be delayed until 2021.

“Cambodia as well as other countries around the world are being adversely affected by the global Covid-19 pandemic, which has caused several sectors to suffer from the unprecedented crisis,” the statement said.

It added that companies were being hit hard as buyers have canceled orders and refused to accept products already made, and that “the sector’s recovery will take a long time.”

The minimum wage affects about 800,000 workers from more than 1,000 factories in the textile, garment, and footwear industries and was set at $190 per month for 2020. According to the Labor Ministry, more than 200 factories have closed or suspended operations due to Covid-19, affecting more than 100,000 workers.

Ath Thorn, president of Cambodian Labor Confederation (CLC), said there is no reason that wage discussions should be postponed, since the new minimum wage would not implemented this year.

“I think that they don’t have any reason to postpone the minimum wage negotiations because we don’t need to implement it until 2021,” Thorn said, adding that the economy would still have six more months to recover before the new wages would come into effect.

“Currently, the minimum wage for garment and footwear workers is still low…so its necessary that the three parties of employers, unions and the government discuss with each other every year,” Thorn said.

He said that in accordance with the 1997 Cambodia Labor Law, the three parties must prepare documents to support their new suggested minimum wage, then present and discuss them at the annual meeting.

“Normally, the employers’ party does not want to increase workers’ minimum wage, and they always make excuses saying that they do not make much profit and that the workers already have a high enough salary. Now, they’re claiming they can’t raise wages because of Covid-19,” Thorn said.

He added that CLC and other unions usually begin meeting in July to prepare strategies for the three-party meetings, then in August and September, the unions meet with GMAC and the three will then propose their agreed upon wage to the government in September or October.

“I request the employers’ party to be willing to negotiate on minimum wages in the future,” Thorn said, adding that they should consider that workers are facing rising living expenses and also often are not able to seek other work outside the factory.

GMAC Deputy Secretary-General Kaing Monika could not be reached for comment.

Asked about the GMAC statement, Labor Ministry spokesman Heng Sour said via Telegram that the three-party meetings must proceed as planned because they are part of the law.

“Everyone has the right to express his or her opinion, but everyone must adhere to the mechanisms provided by law. The law requires to hold the meeting, so we must meet each other,” Sour said. “The law does not say that wages must rise every year, either up or down depending on changes in the seven criteria of minimum wage.”

President of the Cambodian Alliance of Trade Union, Yang Sophorn also called for the meetings to go on, saying that major clothing retailers such as Adidas and H&M had recently said they would place new orders for products from Cambodia.

“This is a good sign for discussing the new wage for workers in 2021,” Sophorn said. “GMAC’s claim’s are not reasonable.”
She added that the government should be fair in its consideration and should not only listen to one perspective.

Seak Hong, an employee at Horizon Outdoor factory in Kompong Chhnang province, that the owner of her factory had suspended 1,548 of its 8,000 workforce for the month of May, but had returned to full operation. She said that new wage talks were essential, as the current $190 minimum was not enough.

“This salary does not allow us to live well because all goods and food at the markets are increasing and transportation fees are also rising,” Hong said. “I appeal to GMAC and the government to continue considering an increase to the minimum wage.” 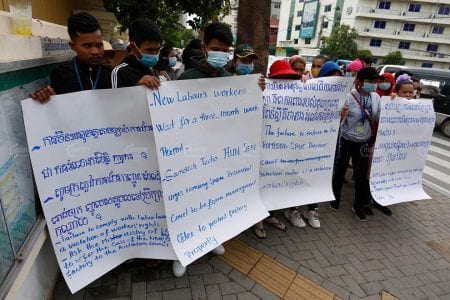 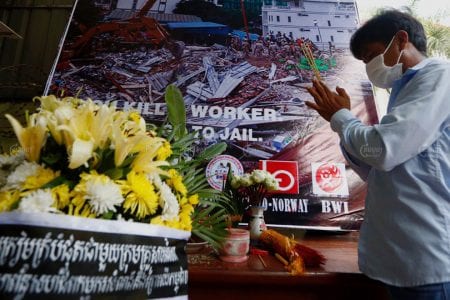